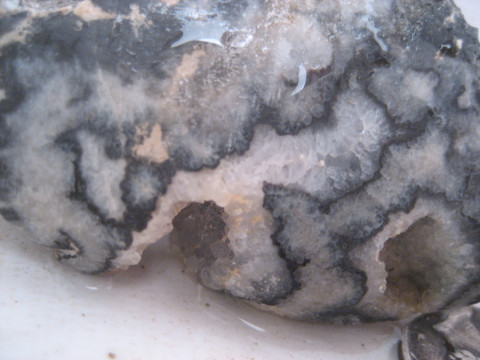 Ten years ago a collecting area in Bear Canyon was found at the southern end of the Pryor Mountains in Montana. You better be prepared for some tough terrain and know that you will find the collecting area for these cool little agates is only accessible by foot. And forget anyone taking any kind of equipment to help get to those little buggers. The nodules have been weathering out from below the rims and rolling downhill for thousands of years. You find them in drainage channels, and erosion features all the way down to the main canyon floor. I mean that these agates are poking out of the canyon walls much like Alabama Paint rock in that the agates are high up and out of reach. If you can get to one by rope you then need to hammer and chisel the dang thing out without damaging the agate. The wall that they're in is very hard itself and takes much effort making any collecting done mainly from float. The predominant colors are black and white in a fortification pattern, with nodules typically in the 1" to 2" range. A small percentage have no fortification lines making it even harder to come up with a nice piece for cabbing. The outcrop is about 15 miles from the classic Dryhead Agate location but the look and coloration of the Bear Canyon Agate is very different from Dryhead agates.  Here's a nice slab that will cut a beautiful Bear Canyon gem. -WET pic.-( 1 oz.)