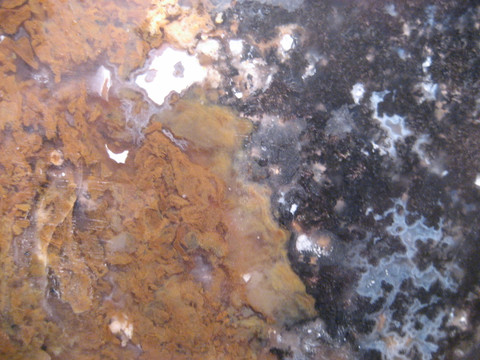 Very near Prinville Oregon you can find where this grand plume agate once was when discovered by a fellow named, Shirts Quant. Back around the time he was born in 1915, his mother would load up the Model T with some food and water and be gone for days collecting thunder eggs. In fact her nickname was "The Thunder egg Queen". Yes, the hounds were in his blood. In 1944 he discovered a long ledge of  gold, black and red plumes galore,  like he never saw before. Story has it he was to report to duty in the service in a few days. He brought out as much as he could and wrote all the info down for his mother to stake a claim while he was gone. I can't believe the story goes on to say he came home and found out no claim was staked and all the agate was found by someone else and completely gone. He did have the load he brought out the day he found it and pieces of it are still in his Rock Museum. He went on and discovered a bunch of big name rocks out of that holy area and is a Rock God of sorts that sent his name into rock history. Shirts Quant lives on forever with his gems around our necks to remind us.  -WET pic.-(3"x 2"/2.2 oz./6mm thk)  no fractures..excellent cutter