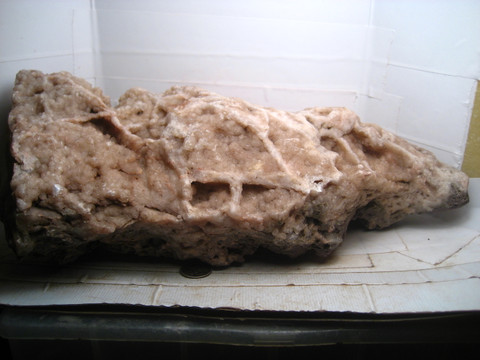 This mineral forms in cavities and in veins of basaltic and other rocks. In the copper deposits of Michigan, it was formed mainly as an intermediate mineral of the ore stage of copper. It is present in most amygdaloids, filling vesicles or replacing rock or earlier minerals. It occurs abundantly in veins and rarely in the conglomerates. In veins, it is very commonly associated with copper, which may be spread through the mineral. It may also be associated with silver also. Prehnite commonly occurs as crystals in aggregates but may be massive in veins. Much of the prehnite is pale apple green but can be highly variable in color like this amazing example found on the north shore of Lake Superior. It weighs in at just over 7 lbs.